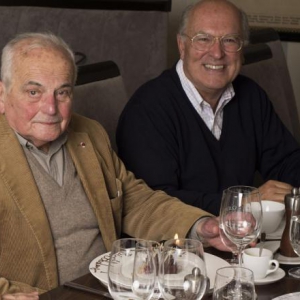 Pierre Joannon, a former Founder Trustee of the Princess Grace Irish Library, author of numerous books on the Emerald Isle, and Consul General of Ireland in the south of France, will speak of his long-standing friendship with the academician Michel Déon following the publication of his latest book entitled Une amitié vagabonde (Editions La Thébaïde).

This collection of essays covers forty years of complicity between two men: Michel Déon and Pierre Joannon, founders of the Prix Jacques Audiberti created in 1989 to honour a literary work celebrating the Mediterranean. They shared a passion for the mare nostrum – the birthplace of western civilization – and Ireland; one lived there, the other represents it in his role as Consul General. These sixteen texts (some by Michel Déon have never been published before) underline the affinity between the Mediterranean and the West of Ireland. Dialogues, portraits and accolades sing the praises of not only these two writers but also Jean d’Ormesson, Lawrence Durrell and Jacques Audiberti. They discuss the pleasures of life, the love of literature, the passion for books, the reasons for settling in Ireland, so many memories. The preface by Jean-Christophe Rufin, a fellow academician, emphasises the insatiable curiosity of the author of Un taxi mauve who lived since the early seventies in Tynagh, County Galway.

MICHEL DÉON (1919-2016) was one of the most important writers on the French contemporary literary scene, the author of more than fifty best-selling books. He was the son of an advisor to Prince Louis II of Monaco. As such, he was very attached to the Principality. Following his election as a member of the Académie Française in 1978, it was Her Serene Highness Princess Caroline of Monaco who presented him with his ceremonial sword in 1979. Les Poneys Sauvages (The Wild Ponies) — his most famous novel — won the Prix Interallié in 1970. A brilliant evocation of the West of Ireland, his second homeland, Un Taxi Mauve (The Purple Taxi) was awarded the Grand Prix du Roman de l’Académie Française in 1973; it was made into a film starring Philippe Noiret, Peter Ustinov, Charlotte Rampling and Fred Astaire… and it was thus that the French public discovered the splendours of Connemara. Michel Déon constantly praised the country where he spent more than forty happy years of his long life. Cavalier, passe ton chemin! (Horseman, pass by!) is another book on Ireland and the Irish, published by Gallimard in Paris in 2005. It was translated and published in Dublin by Lilliput Press just a few days before his death in Galway on 28 December 2016. More Irish than the Irish themselves, Michel Déon was undoubtedly the best intercessor between France and the Emerald Isle.

PIERRE JOANNON is recognized as one of the foremost specialists of Irish history about which he has written numerous books and articles. His Histoire de l’Irlande et des Irlandais, published in 2006 and re-printed in 2009, has been acclaimed as the most authoritative source of reference on the subject ever published in France. He is also the author of the only French biographies on Michael Collins and John Hume. He has written a brilliant evocation of the capital city of Ireland entitled Il était une fois Dublin. He received Honorary Doctorates from the National University of Ireland and from the University of Ulster. He served as trustee of the Princess Grace Irish Library of Monaco from 1984 to 1987. Since 2002, he is a member of the Strategic Committee of the Irish Cultural Centre in Paris. Since 1973, Pierre Joannon has been Honorary Consul General of Ireland in the South East of France.

In 1997, Pierre Joannon was granted Irish citizenship by the Irish government for services rendered to Ireland, and in 2002 he was awarded the Légion d’honneur by the French government for his contribution towards the strengthening of Franco-Irish relations. In 2009, Four Courts Press of Dublin published a book edited by Professor Jane Conroy of UCG entitled Franco-Irish Connections: Essays, Memoirs and Poems in honour of Pierre Joannon. Among the contributors were two Nobel laureates, two former Taoisigh, five ambassadors, three prestigious poets, and fifteen renowned historians. In November 2012, he was one of the first recipients of the newly founded Presidential Distinguished Service Award for the Irish Abroad. This high distinction was bestowed upon him by the President of Ireland, Michael D. Higgins, in the presence of An Taoiseach Enda Kenny.

Une Amitié Vagabonde will be on sale after this lecture. The special reduced price for the Friends of the PGIL is 14 EUR. Cash only - no cheques or credit cards. You may reserve your copy in advance.

IMPORTANT: If you book seats for an event and are unable to attend, please let us know even as late as the day of the event; your unwanted seats can be offered to Friends of the Library on the Waiting List. Thank you.