Bankruptcy is the most severe sanction available against a person in debt, and rates of insolvency have, in the wake of the global economic recession, been rising in Ireland.

This lecture looks at the history of bankruptcy in Ireland in the late nineteenth and early twentieth centuries — the period in Irish legal history when bankruptcy peaked.

It examines the shopkeepers, drapers, farmers and politicians who became insolvent; it analyses the causes of those insolvencies and describes how bankruptcy affected the lives of those who were declared bankrupt.

DR KEVIN COSTELLO is a Senior Lecturer in the School of Law at University College Dublin.

A graduate of Trinity College Dublin, his publications include monographs on The Law of Habeas Corpus in Ireland (2006) and the Court of Admiralty of Ireland 1575-1893 (2011) as well as articles on aspects of English and Irish legal history published in English, Irish and American journals.

His principal current research interest is in the history of judicial review in English law between the seventeenth and twentieth centuries.

In 2014, he was one of the first recipients of the Irish National Forum for the Enhancement of Teaching and Learning ‘Teaching Hero’ award. 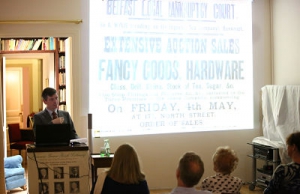 Dr Kevin Costello during his lecture
×