JUDGING AT THE HEART OF EUROPE 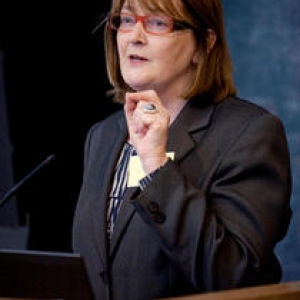 JUDGING AT THE HEART OF EUROPE

MRS. JUSTICE O'KELLY MACKEN was educated at Trinity College and at King's Inns in Dublin and was awarded a Masters in Law by the London School of Economics in 1973.  An Honorary Doctorate was conferred upon her by Trinity College Dublin in 2002.

She was called to the Bar of Ireland in 1973 and, later, to the Bar of England and Wales. From 1973 to 1979, she worked as legal counsel in a firm of patent and trade mark agents.  From 1979 to 1998, she practiced as a barrister, becoming a Senior Counsel in 1995, and specialised in commercial and chancery work, as well as in EU law, while at the Bar.

Mrs. Justice O'Kelly Macken is a Bencher of the Honorable Society of King's Inns and an Honorary Bencher of Middle Temple London. She was the first Averil Deverell Lecturer in Law at Trinity College Dublin, and has been a guest lecturer at King's College London, at the University of Pittsburgh and at Georgetown University Law School in the United States and in Florence, at the University of Llubljana, Slovenia, and at several other universities.  In 2003, she was invited to become the Global Hauser Fellow at New York University.  She is a former member of the Board of Trustees of the Academy of European Law (ERA), Trier, Germany, and Chairman of the Irish Centre for European Law (ICEL).  In 2005, she was appointed a member of the Permanent Court of Arbitration in The Hague.