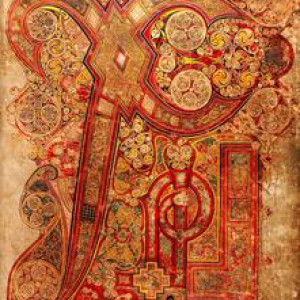 The fifth century death of the Roman Empire — an event so significant in the history of the West — did not reverberate loudly in distant Ireland.  Entrenched in its Iron Age tribal culture of chieftains, rural ring forts, and oral culture and law, Ireland did however readily and quickly respond to the call of Christianity.  Embracing the mission of Christ, Irish monk-scribes set about recording and illuminating the books of their new faith, with a new vision of how these codices should be written and decorated.  The result was a treasure in vellum and parchment with gospel books such as Durrow and Kells.

These wonders of the written Word would be used in the Irish mission of conversion, education, and good works — a mission which still characterizes the faith system of the Irish.  Let us explore some of these wondrous illuminated manuscripts together.

TINA WALDEIER BIZZARRO is a Full Professor in the Department of History of Art at Rosemont College in Rosemont, Pennsylvania (USA) as well as an Adjunct Instructor in the Irish Studies Department at Villanova University in Villanova, Pennsylvania (USA). At Rosemont, she has been awarded Pew Grants and Connelly Grants for scholarly development, as well as the Lindback Distinguished Teacher’s Award in 2007.

She earned her PhD from Bryn Mawr College in History of Art, where she was the Howard Lehman Goodhart Fellow in Medieval Studies from 1978 through 1982 as well as the recipient of several Kress Fellowships during her tenure at Bryn Mawr College.  Before that, she earned BA in French and Italian Language and Literatures, from the University of Pittsburgh, having spent two years at Hamilton College in Clinton, NY.

Tina was elected to “Phi Beta Kappa,” America’s oldest and most widely-known Honors Society as an undergraduate scholar.

She spent six months as a Fulbright Scholar in Sicily in 2006, where she photographed and researched the roadside shrines, or edicole, which dot the countryside of southern Italy. Her Fulbright project and the title of her publication of this material will be “Wayside Warriors: The Roadside Shrines of Sicily.” Her love of that hot, mysterious island led her to inaugurate, develop, and teach in her Summer Studies Program in Messina, Sicily. This program ran for six summers (2000-2006), offering courses in history of art, studio art, anthropology, and history.

She received a National Endowment for the Humanities Summer Travel Stipend in 1997 for her project, “French Medieval Architectural Criticism: From the Restoration through the Third Republic.”

She has served on peer review committees for the Fulbright Commission and for the National Endowment for the Humanities.

Her interest in and love of Ireland’s visual culture stems from her graduate school days when she began to develop courses on Ireland for Villanova University. Since then, she has regularly taught “The Art of Ireland” in Villanova’s Irish Studies Program. She has taken many student groups to Ireland to study and experience Ireland’s visual culture, from the Stone Age through the Middle Ages. Ireland has been a passion for her for most of her academic life.

SUSAN KELLY VONMEDICUS was born and raised in Philadelphia, and educated at the Mater Misericordia Academy, The Baldwin School, the Pennsylvania Academy of the Fine Arts, The Prosopon School of Iconology.

In the mid-1970s, Susan worked as a preparator (in the vaults) at the Museum of the Pennsylvania Academy of the Fine Arts, a formative experience, literally hands-on immersion in the structure, quality and integrity of masterworks of art. All the while developing her work as a painter, she managed a Fine Art Photography Gallery in Philadelphia in the early 1980s, making light a central theme to her work.

In 1990, she undertook the study of traditional methods of iconography, apprenticing under master iconographer Vladislav Andrejev. Susan continues to study, work and teach in his Prosopon School of Iconology, making icons using the ancient technique of egg tempera and gold leaf on panel.

Currently, Susan is adjunct faculty member at Villanova University teaching Calligraphy in the Studio Art department, developing the course to include the practice of letterforms and study of text based art.

She spent the winter of 2013 as artist-in-residence at the Burren College of Art in Ballyvaughn, County Clare, Ireland. The time was spent exploring the creative process through new techniques and applying those already mastered to new forms.

Susan’s connections to Ireland are in her family heritage coming out of Newport, County Mayo, from where her great-grandparents emigrated to the US and where cousins remain in close contact with the family members who left the west coast of Ireland those 150 years ago. Visits to Ireland over the years, including accompanying her cousin His Serene Highness Prince Albert II of Monaco on His State Visit there in 2011, have informed her study of the art and culture of Ireland and how it can be integrated into her art making today.

In 2000, a book of her illuminations, Letters from Heaven, an Illuminated Alphabet was published by Conciliar Press of Ben Lomond, California. Susan has reviewed books for Living Church magazine and has done commissioned artwork for two musical recordings.

Susan’s work is in public and private collections internationally; recent commissions include an icon of Saint Patrick made for Taoiseach Enda Kenny and an icon of Christ Emmanuel for the Cathedral of Saint Nicholas in Monaco to celebrate the 700th anniversary of the Archdiocese. To be able to contribute to the continuity of the triangular connection, Ireland, Monaco and the United States forged by her aunt, Princess Grace, is enormously satisfying and a great honour and privilege.

Susan accepts commissions, exhibits, teaches workshops and lectures. The mother of three sons, she lives and works in the Philadelphia area creating artwork and keeping a garden, chickens and bees.

Reservations are necessary due to the limited number of seats. Entry 10 EUR per person payable at the door.