STEPHEN WALKER is an award-winning BBC journalist. Born in England and educated in Northern Ireland, he has worked for BBC Northern Ireland for 25 years as a television and radio reporter, a documentary maker and a lobby correspondent at Westminster.

He has made numerous current affairs and historical documentaries. Stephen’s journalism has been honoured by the Royal Television Society and the Association of European Journalists. In 2005, he was named the Northern Ireland Journalist of the Year.

His first book, Forgotten Soldiers: The Irishmen Shot at Dawn, was shortlisted for the 2007 Irish Non Fiction Book of the Year.

“Four years ago I came across a story that would fascinate and intrigue me in equal measure. It was the story of Monsignor Hugh O’Flaherty, an Irish priest based in the Vatican who defied the Nazi command during World War II. Using a combination of cunning, audacity and bravery, he hid thousands of Jews and Allied soldiers in safe houses around Rome. O’Flaherty’s rival was SS Lieutenant Colonel Herbert Kappler who watched the Irishman’s every move. Kappler tried to kidnap the troublesome priest and even planned to murder him. O’Flaherty managed to stay one step ahead of his nemesis with a mixture of good fortune and planning. The Monsignor helped to set up the ‘Rome Escape Line’ which used fake IDs, disguises and a labyrinth of secret communication channels. During the German occupation of Rome, the two men played a deadly game of ‘hide and seek’ and it is estimated that O’Flaherty helped to save the lives of around 6,500 people.” 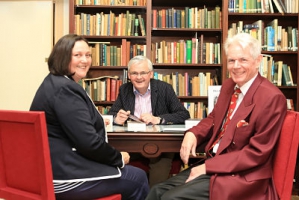 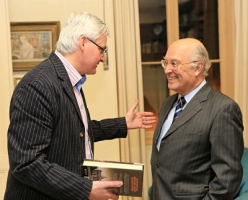 Stephen Walker during his lecture
×